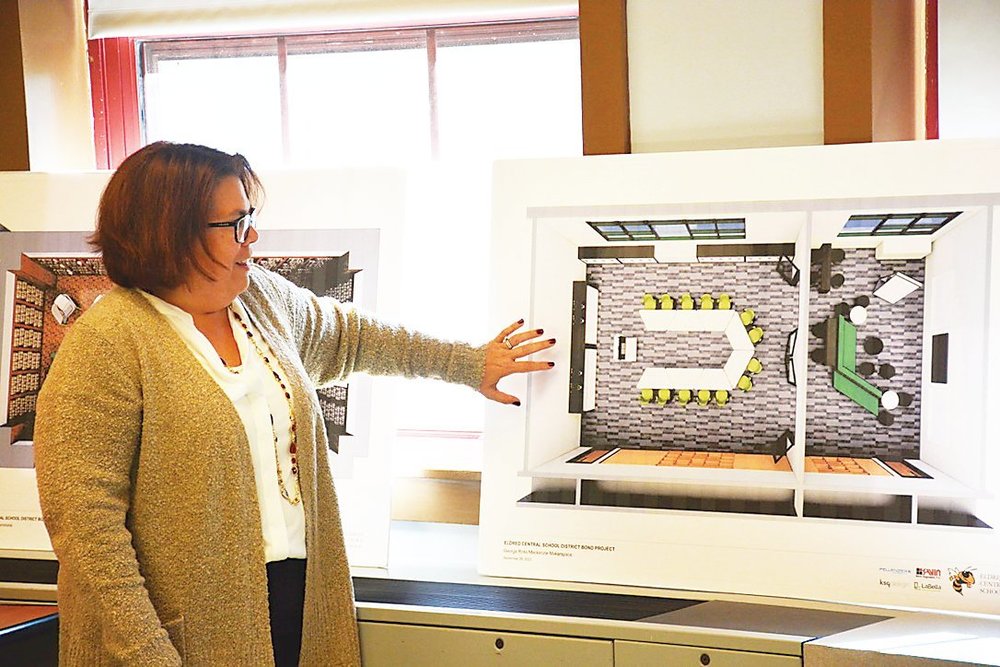 “There are ways to do it and we’re gonna do it,” she adds.

The path there, according to district officials, includes proposed upgrades and renovations that voters will weigh-in on at the polls on Tuesday, December 6. Ferreira and Eldred CSD Business Administrator Caleb Russell answered questions from the Sullivan County Democrat on Tuesday morning.

The total cost of the proposed project, which doesn’t increase taxes, would be $12.73 million. On December 6, Eldred CSD voters will consider giving the district authority to borrow $11.16 million to help pay for upgrades and renovations at George Ross Mackenzie Elementary School and Eldred Junior Senior High School. The district would fund the difference. Also, New York State would reimburse a portion of the overall costs.

“The improvements are designed to support and expand students’ advancement in literacy, math, science, multimedia and sports,” said Ferreira. “They also will further inspire students’ analytical thinking and problem-solving skills, all while enhancing communication, collaboration and innovation.”

At George Ross Mackenzie Elementary School, the district says a new roof would replace the leaky original roof near the end of its useful life. Also, new sidewalks would replace cracked, unsafe sidewalks at the school.

At Eldred Junior/Senior High School, the project would see the installation of a new, wider all-weather football field and track that would also host soccer games and be open to the community.

The district notes that in recent years, one third of home sports events were canceled due to unsafe conditions for student athletes. Speaking of which, there are 104 students (45 percent of the Junior-Senior High School population) participating in a sport this season.

In addition, the district says the project would also include new and expanded restrooms at the field [at the JSHS] and replace “aged facilities with insufficient capacity to meet fans’ needs.” For the first time, the field would have a concession stand, which the district says will improve fans’ experiences at games. Also, spectator seating would be added to the hill overlooking the field.

At both schools, libraries would be upgraded into global learning centers, propelling them into multipurpose areas that the district says will foster collaboration, communication and students’ academic growth. Both schools would also add a “maker’s space” for independent learning and teacher-directed group or individual projects.

According to the district, taxes would not increase as a result of the proposed projects because the funds would be borrowed only after two existing bonds –also known as loans – are paid off in 2025. The bond issue was initiated because the school district budget that residents vote on each year does not include discretionary funds for major work on facilities and grounds.

Knowing that the current bond was coming off in 2025, the district completed a building condition survey and sought input from the community on what they thought was needed. A “wish list” was created and eventually the scope of the projects was pared down to keep taxes neutral.

“That was our message from the start,” said Russell. “We weren’t going to raise or lower taxes, it was just going to swap one [bond] for another.”

Payments on the new bond, if the projects are approved, would be spread over 17 years, with the first payment due in June 2026. A public hearing on the proposal was held on September 29, attracting two speakers.

On December 6, residents will vote from 2-8 p.m. in the Eldred Junior Senior High School gymnasium. For information on how to register to vote or obtain an absentee ballot, visit the County’s website.

Reflecting on the proposed projects, Ferreira said they are sound fiscally and academically, and will allow Eldred CSD students to “compete this century.”

“We used to say, ‘the 21st century skills.’ We are in the 21st century,” she added. “I want to ensure that our students have the top opportunities to be able to gain academic knowledge, personal knowledge, social and emotional skills, all of those things, so they are the best citizens and residents that they can be.”

To view a video, PowerPoint and learn more about the bond projects, visit the district’s newly redesigned website, Eldred.k12.ny.us.